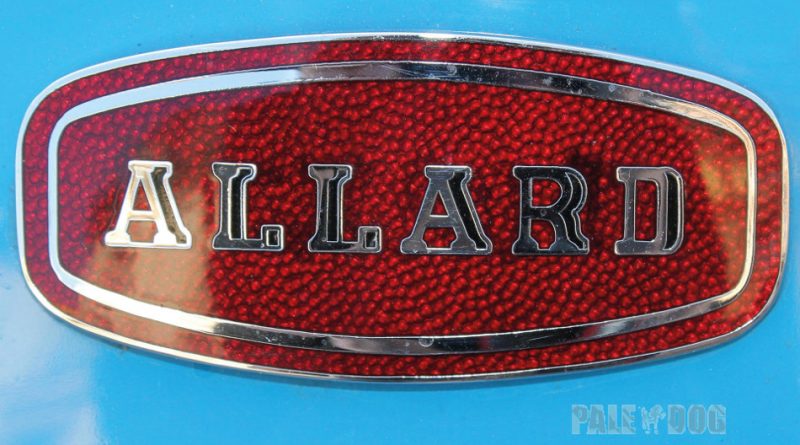 The tale of Sydney Allard, the man who combined American V8 muscle with British sports car bodies years before Carroll Shelby made it famous…

Sydney Allard is the very picture of a man whose life revolved around motorsport in one form or another. Born in Streatham in 1910, Sydney’s first proper taste of competition came in 1929 at the wheel of his elder brother Jack’s hand-me-down Morgan Grand Prix three-wheeler. Syd and his other brother, Dennis, later won a three-lap event at Brooklands in an Aero model, and it was all downhill from there.

By now it was clear to Sydney’s father that the lad wasn’t interested in joining the family’s building business, so he set Syd up in a garage called – confusingly – Adlard Motors, in Brixton. Sydney was still tinkering and building race cars, and, having given up on his Morgan after converting it into a four-wheeler, he began building Specials for Trials. He was competing without much success in a couple of modified Fords when, in 1936, he had an epiphany moment…

Near Adlard Motors, some poor chap had just written off an almost new US-built Ford Model 48. Sydney bought the wreck, dragged it into the workshop, and with the help of a local coachbuilding firm, married the Ford chassis and running gear to the bodywork from a Bugatti Type 51 grand prix car from the bulkhead back.

This was to be the first proper Allard Special, though was better known by its registration number of CLK5, and it was quite a bold move – while most Trials cars were spindly machines that relied upon light weight for success, CLK5 had a huge lump of cast iron in the shape of a 3.6-litre Ford Flathead V8 for power. By relocating the engine, Allard could use that weight to his advantage for traction, and by splitting the beam front axle to make independent swing-arm front suspension, he had created a dominant car in Trials and other races.

Soon, other racers were beating a path to Adlard Motors, wanting a replica machine for themselves. Allard made around 12 of these Specials, most powered by Ford’s Flathead V8 but a couple were powered by the Lincoln Zephyr V12, and if you thought the V8 was heavy… Sydney and two of his customers formed The Tailwaggers team – the name derived from the “exuberant” driving style required with these torquey motors and rather peculiar front suspension – and scored some successes in team events, too.

By now, Adlard Motors had become a successful Ford dealership as well as a fledgling motor manufacturer, but a rather obnoxious chap named Adolf hit the headlines in 1939, and caused all motorsport and race car building enterprises to be put on hold for a few years. During the course of the War, Adlard Motors were contracted to work on Ford and Ford-powered military vehicles from a new base in Fulham, which meant, upon cessation of hostilities, that Allard had a fully equipped workshop and a stock of Ford parts at military surplus prices to be getting on with…

After the War, Sydney formed Allard Motors Limited, and launched his own range of sporting cars in 1946: the Allard J, later referred to as the J1, was the first in production, and was an out-and-out competition two-seater; the K or K1 was a slightly larger, more road-friendly version, and the L or L1 was a four-seater touring car. They were based on the same underpinnings as the then-new Ford Pilot saloon, and featured lightweight aluminium bodywork. Most used the standard 3.6-litre Ford Flathead V8 which was good for 85hp – bear in mind, these were low-compression engines ready to run on post-war petrol – and low axle gearing meant they were sprightly off the line at the expense of top speed. Some J1s got the hot rod Mercury version of the Flathead, a 3.9 with 140hp, and, keen to increase their sporting prominence, Allard would only sell the J1 to customers who would race or rally them.

Sales were quite brisk for such a low-volume, specialist manufacturer, and within a couple of years, the range had expanded to include the M (M1) four-seat drophead coupe in 1948, and the P (P1) five-seat, two-door saloon in 1949. Many sales came from across the Atlantic, where the sports car racers from the Connecticut country club set to the Californian road race scene saw the advantages of a lightweight body and potent powerplant; especially one for which they could buy parts at their local Ford dealership and not have to wait on transatlantic shipping.

With many Allards heading for the new world, Sydney soon realised that shipping engines in from America, only to fit them to cars and send them straight back, was a bit daft, so most Allards crossed the pond without motors. Customers could then choose their own engine, and with powerful, higher-revving motors such as Cadillac or Oldsmobile’s new overhead-valve V8 in late 1949 and, later, the first of Chrysler’s legendary Hemis coming on the market, Allards were about to get really musclebound.

This led to the most famous Allards of all – the J2. The old, rather crude, split beam and transverse leaf front end was replaced with coil springs and telescopic dampers, while at the rear, a Ford centre differential section with inboard brakes and de Dion independent suspension was years ahead of the competition. Coupled with a fire-breathing OHV V8 and a kerb weight under a ton, the 1950 J2 was a force to be reckoned with on the street or track. Sydney Allard and Tom Cole took a J2 to third place in the 1950 Le Mans 24 Hour, despite running half the race with only third gear!

On the American circuits, Allard won many more disciples, including Zora Arkus-Duntov and Carroll Shelby, the men who would go on to provide the world with the Chevrolet Corvette and AC/Shelby Cobra respectively.

At home, the roadgoing range of Allards were being restyled and refreshed, leading to the K2, the P2 and so on, but there were a few blind alleys along the way. The P2 Safari, a wood-bodied, eight-seater shooting brake-style estate, failed to find its niche, and Allard’s attempt to infiltrate the bubble-car market with the tiny, three-abreast, 350cc Clipper also foundered. What should have been Sydney Allard’s moment of glory – overall victory driving a P1 saloon in the 1952 Monte Carlo Rally, beating a young Stirling Moss into second place – was forgotten a day or two later when the death of King George VI took up every drop of printer’s ink.

The next Allard out of the stable was the 1952 Palm Beach. Designed to be a small, budget-friendly sports car, it used the engines and running gear from the 1,500cc four-cylinder Ford Consul or 2,600cc six-cylinder Zephyr, and would probably have been a success… had it been ready in 1952. Sadly, it wasn’t released until 1953, still under-developed, and by that time, other sportsters such as the new Triumph TR2 and Austin-Healey 100-4 were sweeping the market.

On track, the J2 had been updated as the J2X with revised front suspension to move the engine forward, creating better balance and more cockpit room, and the JR, designed for a Cadillac engine and, oddly, automatic transmission. It didn’t matter; new models such as the Jaguar D-type, with their sleek bodywork and new-fangled disc brakes, were eclipsing the old Allards, and the company was struggling.

By the mid-Fifties, the old Allard models were being dropped until the only one left was the K2, or Palm Beach MkII drophead, a larger version of the first Palm Beach, designed to take larger engines. The UK got Zephyr or Jaguar sixes, but the Americans could choose powerplants such as the twin-carburetted Chrysler FirePower Hemi. Unlike many Allards, it was stunningly beautiful, and, with around 300bhp from the Hemi V8, should have set the world on fire and sent the Corvette and Thunderbird back to Detroit with their tails between their legs.

Sadly, it didn’t. It missed its mark, and by 1957, it was the only car left in the Allard catalogue, built to order. Allard Motors Ltd closed production, retreating to a small workshop behind Adlard Motors, which, by now, was one of the UK’s biggest Ford dealerships. Just shy of two thousand cars were produced bearing the Allard name. Who knows, had the Palm Beach MkII clung on for another year or two, it could have become the Shelby Cobra instead of the AC Ace.

Sydney Allard was never shy about admitting that, much like Mr Ferrari, the car company was there purely to fund his racing activities. Aside from the last Palm Beach, Allard cars had always been what could be most charitably described as “not conventionally beautiful.” Allard had always chosen function over form, and seemed to regard styling and perfect bodywork as inconvenient distractions in the pursuit of performance.

Sydney, joined by his son, Alan, continued to pursue that performance long after Allard Motors per se shut up shop. They began concentrating on other avenues such as superchargers, and eventually bought out both Wade and Shorrock supercharger companies. They also produced the Allardette, a 105E Anglia with a supercharged pre-Crossflow engine, which achieved some rallying and racing success.

Sydney died in April 1966, after battling cancer. On the same night, a mysterious fire at the Allard workshops destroyed many of the company’s records. Alan took over the company, and that apple didn’t fall far from the tree – he was one of the leading lights in turbocharging in the early Seventies, long before the European mainstream picked up on the idea. Alan and family closed the site in the mid-Seventies when he and his family moved to Wales, but continued in a smaller capacity, and is still president of the Allard owners’ club. His son, Lloyd, has added a third generation to the business, and is yet another chip off the old block in terms of racing, building and fabrication.