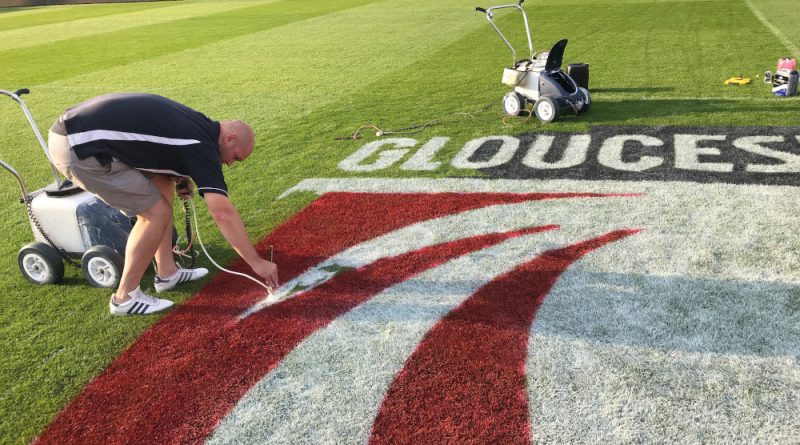 A British manufacturer of pitch marker line marking paints suppling the World’s most prestigious sporting events, a market leading business since the 1960s with International renown.

Fleet Line Markers was initially established by Peter McGuffie in 1953 and produced a polishing paste for treating webbing found on military uniforms such as gators and belts. Although this was a good start for the business the end of National Service meant that the paste they produced was not so sought after from 1960 onwards. Due to this change in circumstances the company diversified into the production of line marking materials, due to Peter’s expertise in pigmentation, and the machinery required to apply the paint. A canny change of direction indeed and in no real time at all, Fleet Line Markers became a leading name in sports field line marking and an award winning one at that, gaining recognition for their innovation in the field.

Not to be confused with road marking, line marking is not a new concept as we have been marking pitches for sports participation to clearly define the field of play since the Nineteenth Century. Originally the areas of play for sports and recreational activities would have been designated and laid out by markings made from wood shavings or dust and ash. The materials used progressed to become compounds that were more easily spreadable with limestone and chalk becoming the chosen elements which provided greater flexibility and durability for line marking, and indeed the line markers and pitch custodians, the Groundsmen. The challenges that these new compounds overcame were unfortunately outweighed by one of our Northern Hemispheres most frequent elements, the rain. As soon as the rain arrived our newly marked pristine sports pitches were simply washed away and the whole process needed to be repeated before we could once again compete in our sporting arenas. Over time and with further development and advancements more permanent marking materials were created and today there are a range of solutions to provide both permanent and non-permanent lines and markings.

Advancements have also been made in the other crucial part of the art of line marking, the application. Obviously, the material for marking out the pitches of play must be applied and many different factors come into force when marking out our competitive landscape, from uniformity of dimension, to exact volumes of paint applied and of course the speed and ease with which the Line Marksperson can work. Towards the end of the Nineteenth Century Line Marking Machines were introduced to enable Groundskeepers to produce much straighter, crisper, sharper lines on pitch boundaries and inner circles and boxes. Enhanced engineering featuring pressurized jetting systems, allowed the users of these machines, the line marking artists, to produce and create more accurate more professional lines and shapes far quicker than they were previously able.

Peter McGuffie’s Son, Ian McGuffie, joined his father in the award-winning Fleet Lime Markers business in the 1980s and today is the Company’s Managing Director. He has helped drive the business forward further developing and growing it into new territories, regions and International markets. Over its, more that sixty year, history Fleet Line Markers have expanded as a company and now manufactures paint in New Zealand which covers the Australasian market and also produces paint in Nebraska to service its customers in the United States of America. The Company’s Head Office is in a familiar English town close to all our hearts and part a Place of Outstanding Natural Beauty, Malvern, and the office and production facility is in walking distance from the Morgan Motor Company’s premises on Pickersleigh Road, in nearby Spring Lane.

Traditionally our sporting trails, tribulations, endeavors, victories and defeats were acted out on grass pitches, but these days all manner of specialist surfaces can be and are frequently used for the myriad of different and wonderful games played, from the Kabaddi court to the Cricket pitch. All these play areas need to be defined and market out so that our competitions can be fairly judged and enjoyed by participants and spectators alike. Today, Fleet Line Markers produce a wide range of paints to cover the various surfaces and applications where line marking is required. In their range of paints, you can find the perfect match for your line marking requirements be it for grass, concrete and tarmac and even artificial grass, AstroTurf and rubber, being the most popular uses. When you consider the amount of professional sporting events that take place in the annual calendar, with television coverage, be that the weekly football league matches, cup matches, the same with Premiership Rugby, the County Cricket matches and Tennis just here in England, let alone the whole of the U.K that is a huge amount of line marking. Considering all the professional sport Internationally, including international competitions, you soon see that this is a lucrative and consequently competitive marketplace to be in, and that’s before we have even considered the sporting calendar of the plucky amateur and schools and colleges! The retail cost of Fleet Line Markers paint is from £8 – £10 for an aerosol and from £28 – £36 for a ten litre tub.

It is not just paint of course, Fleet Line Markers also manufacture advanced line marking products and can provide line marking machines that will suit all needs from a straightforward, simple spray marking machine to the very latest “BeamRider” line marking system. The BeamRider brings line marking technology right into the 21st Century and not only this, it is the only laser guided automated line marking machine in the world and is used in many applications from schools, colleges, football and hockey clubs and it eliminates the need for string lines and despite its advanced capabilities is also easy to use. The BeamRider, having been in production for ten years, also saves time and gives laser straight lines which are big benefits over more traditional systems.

At Fleet Line Markers innovation is key, it is part of the Company’s ethos and its success. A major part of this innovation is an eye for the Business’s environmental responsibilities and how this informs and shapes the development of products and their impact in the sports field. A great example of this is the (patented) “Flozle” which is an innovation the Company has created to solve one of the industry’s age-old problems of paint nozzle blockages. By effectively and efficiently using a very small amount of water the Flozle allows the nozzle to remain clean and paint free which in turn reduces the amount of waste and this benefits the environment and user who can mark lines without interruption and waste. The retail cost of a line marking machine obviously varies widely depending on its function and capabilities from a handheld Aeroliner 2 at £145 to £7,500 and beyond for a ride-on Line Marking System.

Fleet Line Markers also ensure that all their products are produced in an environmentally sustainable manner where possible and the Malvern Head Office and facility is powered by solar panels, helping to really reduce their environmental footprint as a manufacturer.

If Line Marking is an area of interest or indeed employment, maybe there is a Grounds Person in your life, or just to find out more about this well-established British business with a Worldwide market visit their website, details below,