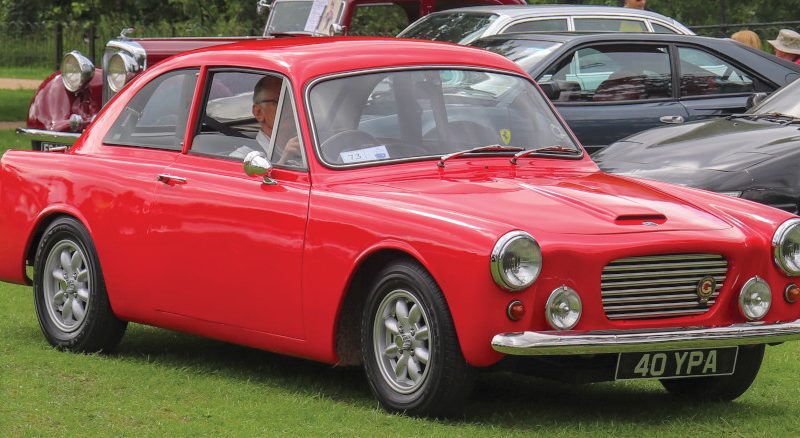 Arguably the only motor manufacturing concern ever to come from Wales, this company burned brightly but briefly in the Sixties heyday of the low-volume GT special.

The industrial areas of Wales have always provided British manufacturing with many of the components needed to build cars. There seems to be a bit of a renaissance going on there, too, as the likes of Aston Martin have moved assembly to Welsh factories, and even the reborn TVR factory is in Ebbw Vale.

In the last century, though, mention Welsh cars to anyone, and nine out of 10 people would give you a blank look and a shrug; the tenth might be able to recall the name Gilbern. Gilbern was born in a shed behind a village butcher’s shop in Church Village, near Llantwit Fardre, Glamorgan. Hardly an auspicious start for a car company, although one chap who was born in a stable went on to do rather well for himself…

Giles Smith was the village butcher, and had a keen interest in sports cars, especially the ‘specials’ of the time, usually lightweight sports bodies built onto pre-war chassis and running gear. Bernard Friese was born in East Prussia and joined the German army as a teenager. During World War II, he was captured and sent to a PoW camp in Kent, but after the war found that his erstwhile Prussian home no longer existed; it was now in Stalin’s Poland, so he decided to stay, married a local girl, and worked for a firm of coachbuilders. There he put his knowledge of fibreglassing to good use, but eventually moved to Wales.

At the time, Britain was awash with sports cars from the likes of MG, Triumph, Jaguar, Lotus, Austin-Healey and Morgan, and Giles Smith was in the market. One day, he happened to bump into Bernard Friese, and, once they discovered their shared love of sportsters and specials, they became firm friends. It was Friese who suggested that Smith should consider building his own one-off special, and the seed was sown.

The pair set about building their little coupe special in the old abattoir behind Smith’s shop. With Smith’s tube-frame chassis and Friese’s fibreglass bodywork, the project was near completion when a local racing driver, Peter ‘Taffy’ Cottrell, came around to have a look. He said that it was too good to be a one-off, and that they should consider putting the car into production.

Thus, a new sports car manufacturing concern was born. Giles and Bernard combined their Christian names in 1959 to make Gilbern Sports Cars (Components) Ltd and began building copies of their prototype. They named it the Gilbern GT and built the first three or four cars in the old abattoir, the second car being sold to Taffy. They sold the GT in kit form, a tube-frame chassis and bodyshell to which the buyers could fit the engine and running gear from an Austin A35 – kit cars had become more popular throughout the Fifties as a bit of a tax dodge on the Purchase Tax added to new car prices – but soon switched to selling part-completed cars with a comprehensive kit of all new parts for home final assembly.

After Autosport road tested the GT in 1960, giving it very good reviews, Gilbern outgrew the abattoir – they’d had to lower completed bodyshells from the first floor of the ‘factory’ with a winch, and cut down a large tree in the garden to get them out. In 1961, Smith’s father loaned the pair £700, with which they bought a site at nearby Red Ash Colliery, which had closed down in 1921, and brought in some pre-fab buildings, which they assembled themselves.

With just five people on the workforce, Smith and Friese began turning out GTs at a rate of about one per month. The car began to evolve, too – the original 948cc A-series sprouted a supercharger, and the lightweight, all-alloy 1,098cc Coventry Climax FWA overhead-cam engine became an option. Then the old steel wheels and rear leaf springs gave way to wire wheels and coil-sprung trailing arms, then the engine from the MGA was used before finally settling on the 1,800cc BMC B-series motor from the then-new MGB.

With the new engine came a new name, the Gilbern GT1800, and production began to climb. Soon they had 20 people on the staff, turning out one car a week, and the little GT was becoming a popular road and track car. In 1965, they were finally accepted by the Society of Motor Manufacturers and Traders, which meant that they could have a display at that year’s London Motor Show, and the word spread even further.

By this time, though, the old GT1800 was beginning to show its age, and a new model was on the drawing board. Called the Genie, it was a larger 2+2 coupe that debuted on the Gilbern stand at the London Motor Show late in 1966.

To suit the larger car, Smith and Friese had chosen a suitably larger engine: Ford’s new ‘Essex’ V6, designed for their then-new MkIV Zephyr and Zodiac. Gilbern had experimented with the earlier V4 versions of the same powerplant in the GT, but they were never anyone’s favourite motor, and most V4 Gilberns were converted back to MGB power. The 2.5 and 3.0 Essex V6 was a much sweeter motor, and its 60° V made it compact, though its robust all-iron build made it very heavy for its size. It was perfect for a 2+2 tourer, though, and was used by many low-volume manufacturers including Marcos and Reliant, for their Scimitar.

The swinging Sixties were in full swing, and with celebs as diverse as Anthony Hopkins and Prince Charles being snapped behind the wheel of a Gilbern, things were looking rosy. At home, in the old colliery at Llantwit, however, Smith and Friese were in something of a dilemma. Because they mainly built cars to order through a small band of dealers, they were a rather hand-to-mouth operation; there wasn’t much capital on hand to expand, and they didn’t want to risk taking large loans. They needed a new strategy.

Not far from Gilbern HQ was ACE Capital Holdings, a company run by the Collings family with fingers in many different pies, the most notable being the manufacture of one-arm bandit slot machines. One of the family sons, Roger Collings, was a great car enthusiast and knew all about Gilbern, so when he came along in 1968 offering a large cash injection to take over the company, Smith and Friese accepted. They did stay on as Directors, although Smith left soon afterwards, and Friese only stayed long enough to oversee the development of the new model. They were replaced by Mike Leather and Maurice Collings as joint MDs.

With Collings family financial backing, Gilbern expanded, taking over more buildings on the same site and more than doubling the workforce. They also accelerated development of the car that would take over from the Genie: the Invader MkI. It looked remarkably similar to the Genie, but the changes were under the skin with an improved chassis carrying MGC front suspension and larger brakes. Inside, it also had wood veneers, electric windows, and an overdrive manual or three-speed auto gearbox, the sort of trappings buyers expected from a GT when the Invader debuted in July 1969. You could still buy your new Invader in kit form, or ready-built to drive away.

At the 1970 Motor Show, Gilbern unveiled the Invader MkII, with a chassis beefed up even further after stress-cracks began appearing in the MkIs. They also announced an estate version, doubtless looking to capitalise on the popularity of the Reliant Scimitar SE5, though it would be well into the following year before it went into production.

At the same time, there was an all-new design on the drawing board. Designed by Trevor Fiore, the T11 was a low-slung two-seater with a mid-mounted, transverse 1,500cc engine and five-speed gearbox from – of all things – the Austin Maxi. A prototype was built, but with the future in doubt, the bosses got cold feet, the project was shelved and the T11 never made it into production. The prototype was found and restored in the early years of this century.

At the end of 1971, work on the Invader MkIII was underway, but things were looking bleak. The new Value Added Tax had knocked the kit and component vehicle market for six, and rivals Marcos had already gone under. This meant that Gilbern could only sell completed, ready-to-drive-away cars, and that meant that they weren’t cheap – a new Invader was over £2,200, well into the same price bracket as a Jaguar XJ6. ACE Capital Holdings had been taken over by the giant Mecca corporation in 1970, and they weren’t interested in a small, loss-making vanity project such as Gilbern, so they left the whole concern in Maurice Collings’ charge. By July 1972, he’d had enough, and sold it all to Mike Leather for £1.

Still, the MkIII Invader appeared at the 1972 Motor Show. Most of the underpinnings now came from Ford, from the hot 3.0 Capri GT version of the V6 to the Cortina rear axle, meaning a wider track and therefore flared wheel arches. The little company couldn’t hope to turn out cars in sufficient numbers to make themselves profitable, and in July 1973, Leather called in the receivers. In September that year, a new investor, Anthony Peters, came on board with talk of three quarters of a million pounds-worth of investment over the following five years. Production resumed, but Gilbern missed the 1973 Motor Show at Earl’s Court, and by March 1974, the Llantwit factory was locked up and silent.

It was definitely a sign of the times. With rising inflation, the OPEC oil crisis and the three-day week for many workers, it was not a good period to be trying to sell a low-volume 2+2 that cost twice as much as an MGB GT, much less trying to find investors to shore up a failed company. When the doors closed in the spring of 1974, there were as many as 20 Invader MkIIIs on site, in various stages of completion. Several of them were completed and sold in dribs and drabs over the next few years; there are still a handful of unassembled bodies and chassis in existence. Various entrepreneurs tried to revive production on the site throughout the remains of that decade, but little ever came of their efforts.

Giles Smith died in 2003, and his old butcher’s shop in Church Village, near Pontypridd, is now a Lloyds Bank that opens four days a week. Bernard Friese died in 2013 at the age of 82. Most of the five factory buildings on the old colliery site at Llantwit Fardre are still standing; the building in which the glassfibre bodies were laid is long gone, but one of the remaining buildings belongs to a mechanic who just happens to be a huge Gilbern fan. He will hopefully be moving into the larger ex-Gilbern paint shop building very soon.

Just over 1,000 cars – either as complete vehicles or kits of parts – rolled out of the valley with Gilbern badges during the company’s short, 14-year lifespan. There’s a strong following and a large, fanatical owners club for the many survivors, but it seems that the marque is now gone for good. Wales may be enjoying an automotive renaissance at the moment, but will there ever be another car Welsh enough to wear the red dragon on its badge, as Gilbern did?