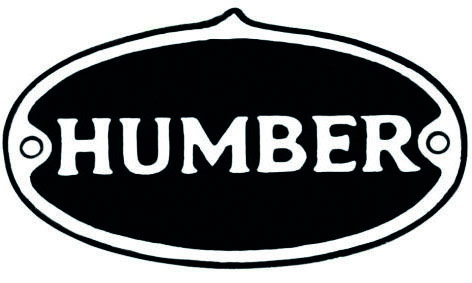 If ever there was a brand that embodied solid, middle class British values, it must be Humber. But, much like the estuary with which it shares a name, it suffered from…turning tides.

Over the past few instalments of What Could Have Been, we’ve looked at a number of motor manufacturers from the Coventry area; here’s another: Humber.

Many people (OK then, perhaps it’s just me) always assumed that Humber Limited was named for its location. Not so. The company name has nothing to do with the river that separates north Lincolnshire from the southern edge of the East Riding of Yorkshire, and everything to do with Mr Thomas Humber.

Thomas Humber came to the world of the horseless carriage by bicycle, as so many other manufacturers did. He founded his Humber Cycle Company in Sheffield in 1868, and business boomed to the extent that the subsequent two decades saw further factories opened in Nottingham and Wolverhampton.

Around this time, the countless bicycle manufacturers dotted around the UK were banding together, consolidating and conglomerating like drops of mercury, to gain greater market share. In 1887 Thomas sold his company to a group of shrewd investors who had already bought up three other cycle manufacturers, but Humber Cycles had such a good reputation that the new enterprise was named Humber & Co Ltd, and floated on the Stock Exchange with Thomas at the helm. In 1889, Humber & Co opened a fourth factory, in Coventry, before Thomas retired a comfortably wealthy man when his five-year contract expired in 1892.

Toward the end of the 1890s, Humber bicycles were expanding into Europe, but the tide was turning, and the bicycle bubble was about to burst. Humber were ready for this, though, and, in 1896, were showing off their first motorised vehicles, the three-wheeled Sociable. They did continue making bicycles, however, until they sold the whole cycle business to Raleigh in 1932.

The very earliest Humber motor vehicles, as with most fledgling car companies, were three-wheelers and quadricycles; the first car that could be called a car was the 1899 Humber Phaeton, powered a Bollee 3hp single-cylinder engine. The newly restructured and renamed Humber Limited later released 3.5 and 5hp versions of the Phaeton, and in 1901, a conventional four-wheeler with 4.5hp De Dion-Bouton power, later upped to 6hp.

The early part of the new century saw Humber release a whole laundry list of new models, from the small and charmingly named Humberette with 5hp, to the Coatalen-designed 2.5-litre 12hp two-cylinder of 1902, up to the 1903 5.3-litre 20hp, which was basically two 12hp engines joined together. By 1905, Humber had found that their niche seemed to lie in the upscale, solid, high-quality market, and they began dropping the smaller models.

Times were still tough, though, and, in 1908, the company consolidated all its motor manufacturing under one roof in a new factory at Folly Lane, Coventry, meaning that the Beeston, Nottingham plant went the way of the Wolverhampton factory before it. It also meant that the company had to put its smaller, better-selling but lower-margin two-cylinder cars back on the market.

The re-expanded range revitalised Humber, and by 1913, they were the second largest motorcar manufacturer in Britain, behind Wolseley. When Europe went to war, Humber switched to armaments and aircraft engines, and when peace was restored, went back to their niche in the solid, reliable cars sector. A new overhead inlet/side exhaust valve engine brought the range up to date in 1922, and subsequent sales allowed Humber to move into the commercial vehicles arena by buying up Luton-based Commer in 1925.

A looming recession threw a spanner in their works, though, and Humber didn’t think that they could survive with their traditional market share alone, so, in 1928, they joined forces with their Folly Lane neighbours, Hillman. What they hadn’t foreseen, however, was the involvement of some significant Hillman shareholders, namely the Rootes Brothers.

It was still all go at the Humber factory, with the introduction of some new models at the end of 1929 – the 16/50, the Snipe, and the large, luxurious Pullman. The Rootes Brothers had already annexed the title of sole export agents, though, and were buying up enough Humber stock that by 1932, the Rootes Group was majority shareholder in both Humber and Hillman. Ironically, they used some of their Hillman shares as part payment for the Humber shares. The effects of the Rootes consolidation was soon evident, with Humber’s inlet-over-exhaust engine soon ditched in favour of shared powerplants, but Rootes kept Humber firmly fixed in its grey, pinstriped marketplace. Wearing stylish but not ostentatious bodies from Pressed Steel, the mostly six-cylinder Humbers were favourites with the bank manager and magistrate set.

By the end of that decade, the country was once again at war, and Humber found a new niche in military vehicles. Aside from the passenger cars that were built for military use – remember Montgomery’s armoured Super Snipe, ‘Old Faithful’? – Humber made armoured vehicles and troop carriers including the Armoured (built by Commer), Light Reconnaissance (built on a Super Snipe chassis) and Scout car and FWD (Four Wheel Drive) truck. They also built Bristol aeroplane engines.

After the war, Humber switched back to its mainstay production – the solid, reliable, rather unexciting six-cylinder Super Snipe, plus the solid, reliable and unexciting four-cylinder Hawk and the vast Pullman/Imperial. Build quality and well-appointed interiors were high on the priority list, as you might imagine, given the target market. In 1950, a Super Snipe was entered into the Monte Carlo Rally, driven by the superbly named Baron van Zuylen de Nyvelt and Maurice Gatsonides, who would later give the world the much-loved Gatso camera. Gatsonides chose the Super Snipe because it was the least sporting car he could find, so he must have been mightily surprised to finish up second overall.

As Britain finally came out of post-war austerity, Humber joined the rest of the UK’s motor manufacturers in “borrowing heavily” from American designers. The new 1948 Hawk MkIII, for example, came from the drawing boards of Raymond Loewy’s studios, Loewy best known for the baroque 1946 Lincoln Continental and iconic 1947 Studebaker Champion. The Transatlantic styling stealing didn’t stop there, though, and the all-new unitary construction 1957 Hawk Series I and 1958 Super Snipe Series I (why they started again with the model numbering isn’t clear) were just Yankee doodle dandy. Both had a distinct whiff of miniature ’55 Chevrolet about them, although they weren’t that far off the same size as the Chevy. In 1960, the Super Snipe Series III was the first British car to feature four headlamps, so it looked like a 1957 Plymouth, but all these cultural appropriation chickens were about to come home to roost…

The early Sixties were a little turbulent for Humber. In the spring of 1963, the Rootes Group opened a new factory in Linwood, Scotland, to build Hillman’s answer to the all-conquering Mini, the Imp. Sadly, between the industrial relations with the Scottish workforce and the underdevelopment and subsequent unreliability of the Imp, the Linwood factory would be a major cash haemorrhage for Rootes. In early 1964, the minority shareholders offloaded their Humber stock to Rootes, making Humber the last wholly owned subsidiary to be acquired by the now-strapped Rootes Group.

Across the Atlantic, Chrysler was feeling left out. Ford had a European operation, General Motors had Opel and Vauxhall; Chrysler was the only one of Detroit’s Big Three without a toehold in Europe. And then along came Lord Rootes, ruler of a once-great empire that had fallen on hard times, offering the whole circus as a going concern. Chrysler, who had just achieved a controlling interest in France’s Simca, bought a 30% share of Rootes Group, which increased to 100% by 1967.

In 1963, Humber began offering their Sceptre, an upmarket version of the Hillman Super Minx. In 1966, the rest of the Rootes brands – Hillman, Singer and Sunbeam – began affixing their badges to their particular version of the three-box Arrow range; Humber got their version, the Sceptre MkIII, in 1967. By 1968, the last of the ‘real’ Humbers, the big Hawk and Super Snipe, had been dropped, and any UK customers wanting a large car from Rootes were offered an Australian Chrysler Valiant.

In 1970, the Rootes Group was formally renamed Chrysler (UK) Ltd, and the old brands began withering on the vine as Chrysler neglected them in favour of the less staid models coming out of Simca. Singer and Sunbeam went first, but the Hillman Hunter and Humber Sceptre shambled along until 1976, when they were renamed the Chrysler Hunter and left to die in the shadow of the Chrysler Alpine.

It was an ignominious end for such a stolidly respectable brand as Humber, its last gasp being as a slightly plusher version of an anonymous saloon. Chrysler had mismanaged the whole European operation since day one, and, by 1979, with a recession brewing at home in America, they sold the whole show to PSA (Peugeot Citroen) for $1. The first thing PSA did was to kill off the archaic Arrow range.

Somewhere, in a dusty cupboard at PSA HQ in Paris, are the rights to a well-loved British brand that stood for quality, comfort and dependability. They’ve been there, untouched, for more than 40 years. It looks likely that they’ll stay there.