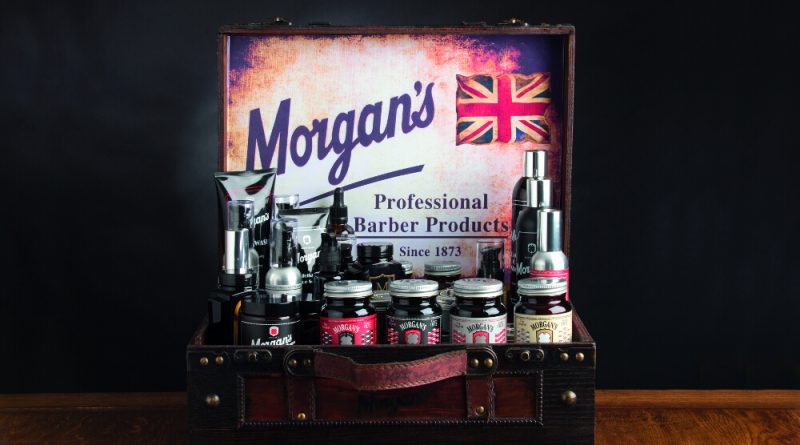 An independent British manufacturer of luxury hair and beauty products established in 1873 and famous throughout the World!

Some years ago my Father told me that when his hair turned prematurely, to his mind, grey he discussed with my Mother the possibility of reversing this not inevitable process, oh such vanity! Considering his Father’s follicle free and shiny bonce, they decided that keeping his hair regardless of its colour might be the best course of action rather than disrupt the universal equilibrium and attempt through chemical intervention to return to looking the age that he actually was! Well, they obviously hadn’t heard of the wonder treatment that is Morgan’s Pomade, which, being that Fathers’ hair colour loss was in the 1970s, which at that time had already been helping men of the World restore their colourful locks for over one hundred years!

Having shared that anecdote with you, we now have an idea of what this made in Britain product can do, but what exactly is Morgan’s Pomade? Morgan’s original pomade is an oil based hair darkening product, which essentially does what it says on the tin, to coin a phrase. The company’s first product was a shampoo, which was formulated, packaged and labelled all on the kitchen table and had the wonderful name of “Marie Antoinette Eucalyptus Egg Julep Shampoo”! The now World famous Pomade was formulated two years later and soon became a hit with word of the product spreading quickly among the stylish men of London and top gentlemen’s barber shops. Unlike a traditional hair dye, Morgan’s Pomade gradually darkens hair over time with regular application over a period of three to four weeks; this makes the effect of colour change less obvious and more subtle, this colour restoration can then be maintained using less frequent applications of the product. Handily, Morgan’s Pomade is suitable for all types of hair and also revitalises hairs that may have become brittle and dry while helping to maintain a healthy scalp, it contains wheat germ oil a good source of vitamin B.

Having begun in 1873 the family business, created by Robert Martin, grew quite quickly and although still a one man operation the production expanded from the kitchen, bravely, to a small factory unit in Highgate, North London. Moving in to the twentieth Century Morgan’s’ Pomade was establishing itself as a well-known English product and brand, also at this time word of this quality item was travelling further afield across the channel to our European cousins. Fantastically, this luxury men’s hair product was making a splash in the undisputed style capital of Europe and becoming de rigueur among the style council of Paris, and throughout other happening capitals of Europe.

The outbreak and continuation of World War 1 created hard times for Morgan’s as it did for many British manufacturers and small businesses, one acute issue being difficulty in obtaining the raw materials used to create the pomade. To further compound the struggle Robert Martin died, and left the business to be run by his Wife Jane Dinah. However, the war did in fact create an opportunity for the company; British soldiers were fighting on many fronts including the Indian sub-continent where Morgan’s Pomade was unknown, the product proved to be a great success and India became the company’s biggest export market, a case of every cloud, albeit a very serious one can have a silver lining!

Soon after the war and in to the 1920s and 1930s Morgan’s Pomade had crossed the Atlantic and entered the golden age of Hollywood, a time of high sophistication with suave and immaculate dressing a must for the man about town, a look that not only suited but positively required Morgan’s products for one to be properly and fully attired for any occasion. Rumour has it that Morgan’s Pomade was the favoured hair treatment of many a Hollywood star and several big names in the world of show business and entertainment.

In the prosperity years of the post war period after both World wars international markets flourished and Morgan’s Pomade Company continued to grow as it exported its products in to these growing markets, with very strong growth in Western Africa particularly in Nigeria. This growth led to the company relocating to larger premises this time settling in the picturesque seaside town of Whitstable on the north coast of Kent. Here the company constructed a purpose built factory with enough land available for further expansion and it invested in modern machinery and technology which enabled a significant increase in production capacity.

As we carve our way through the confusion of the 21st Century men are once again reaching for Morgan’s Pomade and the company’s range of products as male grooming is again in fashion as men strive to look their best both formally and casually, so much so that Morgan’s recently achieved the sale figures of over one billion jars of pomade. A major market for the company is that of the professional barber which has seen a huge resurgence and return to a more traditional offering from the barber’s chair, with Morgan’s products being used by the very cream of the crop!

Morgan’s Pomade Company prides itself on its range of products that are all produced from natural ingredients and researched and developed in their own on-site laboratories and rigorously tested to the highest standards, they even ensure that their supplying partners meet specific ISO standards. The company also considers its ethical and environmental responsibilities and ensures that it uses minimal packaging with all packing, labelling and despatch carried out in-house and there is no animal testing. Such high standards have led to Morgan’s achieving some prestigious awards including, the Global Excellence Award for the Best Hair & Beauty Products Manufacturer 2018, Award for Best Men’s Grooming Product 2019 and British Master Barbers Award for Best Product of the Year.

As for my Father, his remaining hair colour would be best described as white, which is well suited to the distinguished gentleman that he is, whereas me on the other hand could certainly use some assistance as I move in to the lower runs of my second half century. Thankfully I still have a full head of the stuff but my once deep brown hue is fading fast. This has me thinking, purely in the name of journalistic research I might add, to give this quality British product with a fine heritage and international renown, a try and if you care to join me you can make a purchase or contact Morgan’s Pomade Company on the details below.