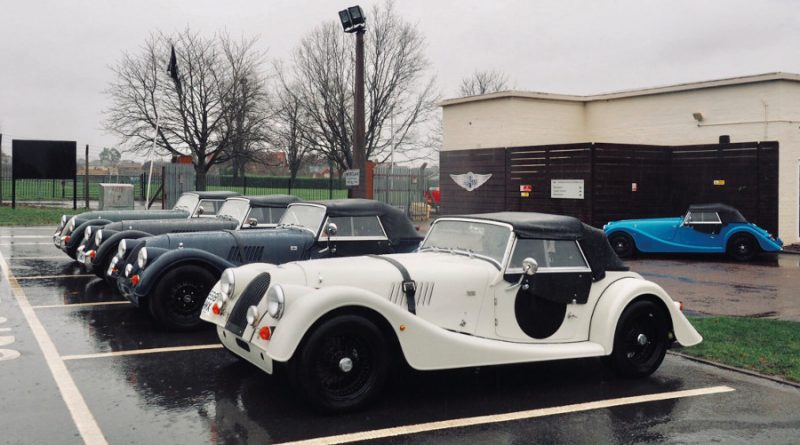 For the second occasion this year Morgan Motors opened the factory for tours and test drives on Saturday April 13th. MOG was there to enjoy the occasion and as ever the visitor car park was a delight for any Morgan enthusiast.

The factory will be open on one Saturday each month through the rest of the year, 08.30am -12.30pm, and details can be found on the Morgan Motor Company website. The next two dates are 11th May and June 1st. Book factory tours (£24) and test drives via the factory themselves, and this year the factory are offering 15 minute “tasters” for £25 offering you a drive in and around Malvern with a driver which are proving a very popular gift indeed.

The restaurant, museum and shop are also open, and Angie, who manages the shop as well as the Visitor Centre is there to help you empty your wallets or heat up the plastic as you spend, spend, and spend on all the wonderful merchandise on offer! We are also very pleased that the shop sells MOG Magazine, and as well as the latest edition they also sell some back copies subject to stock.

That`s the full title of the show and henceforth we will refer to it as the Resto Show, which is the common parlance for the event.

This show ran from 22-24 March and was billed as “Spring`s best Classic Car Show” an appellation with which MOG fully agrees. This is a great start for the classic car season and is the show for car enthusiasts who are members of the “oily-fingernail brigade”. The show comprised car club displays, traders, autojumble and company stands as well as the auctions, Sporting Bears rides and the Practical Classics seminars and Discovery Channel discussions. Although only filling Halls 3,4 and 5 of the NEC there was plenty to see and do.

Many people felt that the show was not as busy as last year but when the figures were released it turned out that there were almost 29,000 visitors which was a few thousand up on last year. This year the visitors spread themselves out a bit more and there was not the usual rush at opening until midday and then a rapid tail-off to mid-afternoon.

The first images of “DBS59” limited edition DBS Superleggeras have been released.

MOG is not turning into Aston Mog, but we feel that a little Aston Martin news doesn’t go amiss, considering the new investment in Morgan Motor Company. Built to celebrate one of the most illustrious moments in Aston Martin’s motorsport history, ‘DBS 59’ is a limited run of 24 special edition DBS Superleggeras, the first of which has just been built at the company’s global manufacturing headquarters, Gaydon.

‘DBS 59’ was a special commission through ‘Q by Aston Martin’, the luxury brand’s unique personalisation service that allows for the creation of iconic sports cars through close collaboration with the Aston Martin design team. Commissioned by Aston Martin Cambridge, the project honours Aston Martin’s historic 1-2 finish in the DBR1 at the 24 Hours of Le Mans. Each car represents one hour of this iconic victory in Aston Martin’s history, in which Roy Salvadori and Caroll Shelby took the chequered flag ahead of the sister car piloted by Maurice Trintignant and Paul Frére.