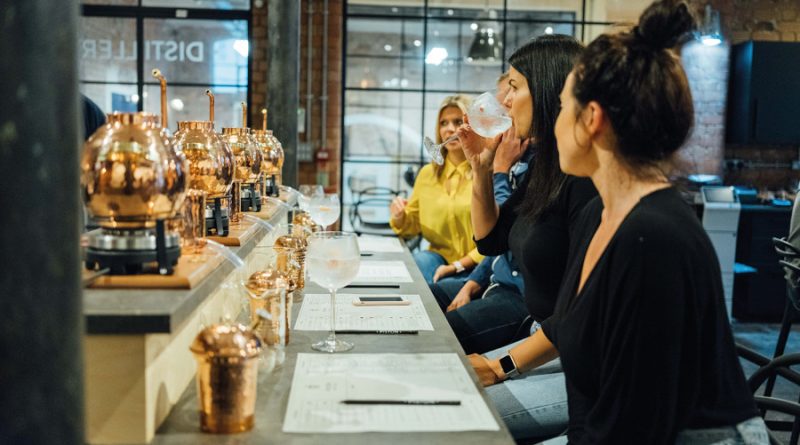 A British distiller using an historic manufacturing premises to produce a thoroughly modern take on an age old libation!

You know the scene, a beautiful summer’s day, the warmth of the sun and just the slightest of breeze for a perfect temperature, the sounds and smells of the midyear months, “Gin and tonic anyone?” Hmm, don’t mind if I do, but just the one, I wouldn’t want to be one of Hogarth’s subjects! More on that shortly.

Deep in the City of Worcester housed in the historic Painting House of Royal Worcester Porcelain you will find Piston Gin a craft distiller offering a range of gin varieties. The brainchild of Nick Weatherall the Piston brand is a new face on the gin market having only been established in 2018 and it is already causing a stir on the international gin stage.

A spirit with a long and interesting history, the gin we know today descends from an herbal medicine and is a development of the Dutch liquor Jenever which is referenced as early as the 13th Century, it is also believed to be where the term “Dutch Courage” comes from as soldiers would drink Jenever before they went into battle. Gin became popular, especially London Gin, which can be made anywhere incidentally, under William of Orange, who become King William the 3rd of England. In fact gin became very popular in England and as its production and sale was unlicensed it was readily and easily available to all, from 1695 to 1735, the Gin Craze saw literally thousands of Gin Shops open up to exploit this roaring trade.

Back in 18th Century London the proliferation of cheap gin was seen as a cause of an increase in the levels of crime and social problems in the city and the Government of the day tried to curtail this increase by introducing The Gin Act of 1736 which levied high taxes on gin retailers, this ended with riots in the streets. This period in London’s history is wonderfully depicted in William Hogarth’s “Gin Street” engraving from 1751, which is when the Gin Act was finally implemented with some success.

Today I’m sure we’d like to believe that things are a little more civilised when it comes to our gin consumption and the once humble juniper berry flavoured spirit has become a multimillion pound industry with a huge amount of distillers from multinationals to cottage industry producers offering an endless array of gin based concoctions. The modern spirit along with juniper is flavoured with a wide array of botanicals and fruit, spice and floral flavours.

The drinks industry has always had a particular skill for marketing and promoting such a wide range of beverages, while being able to quickly exploit a trend giving us Brits French wine by the booze cruise load in the 1980s and 90s to the explosion of Prosecco creating a million fizz fans seemingly overnight. And now, right now, that drinks trend is Gin with a worldwide production of six thousand different types, five hundred of those in the U.K alone.

This is where the Piston Gin story begins, with its creator Nick Weatherall taking the opportunity to visit a gin school in the summer 2017. A builder and developer by trade Nick is a highly skilled craftsman with an eye and drive for perfection, or as realistically close to that goal as is humanly possible and this philosophy is applied to every endeavour that Nick undertakes. This relentless pursuit of excellence has led to Piston Gin having some very prestigious awards bestowed upon it in an insanely short period of time. Having renovated and converted Worcester Royal Porcelain’s old painting works to create just the right space for the distillery, Nick was driven to set about creating a flavour that he felt the world of gin was lacking, and Piston Gin was it. Also, this whole undertaking has breathed new life into a previously derelict building which is now alive with the sounds and smells of a 21st Century hand crafted distillery.

In its brief history Piston Gin has created five different gins which are award winners at the recent San Francisco World Spirit Competition, its Oak Aged Gin won a Gold Medal, the London Dry and Douglas Fir Gin both winning a Silver and it was Bronze for the Coffee infused gin and also the Strawberry and Hibiscus, a truly impressive haul for such a young business! As Nick states, “I’m a maker, I can’t help but tinker with things to try and make them better, nothing leaves until it’s as close to perfect as we can make it, it’s something of a curse but one I’ve come to rely on” Given that the San Francisco competition had the highest number of entrants than it has ever had in its nineteen year history for a maker who has only been distilling for under a year this is a monumental achievement and the team at Piston Gin could not be happier.

The good people of Piston also offer the opportunity for others to try their hand at creating their own signature gin at the Gin School; after all it was a trip to gin school that inspired Nick in the first place. Each week twelve places are available for gin lovers to get up close and be involved in the distillation process, while learning about the history, ingredients and process, and of course gently sampling some fine gin throughout the afternoon.

The gin school is a three hour in depth learning experience for two and costs £130 for two people occupying a workstation each and taking home one bottle of signature gin to share and enjoy. Bottles of Piston Gin, range from £40 for the London Gin up to a very reasonable £45 for the Oak Aged dry gin and are all available through the Piston Gin shop, gift vouchers are also available.

If you would like to know more about this up and coming award winning Made in Britain craft gin and perhaps sample some, you can contact Piston Gin directly, details below;