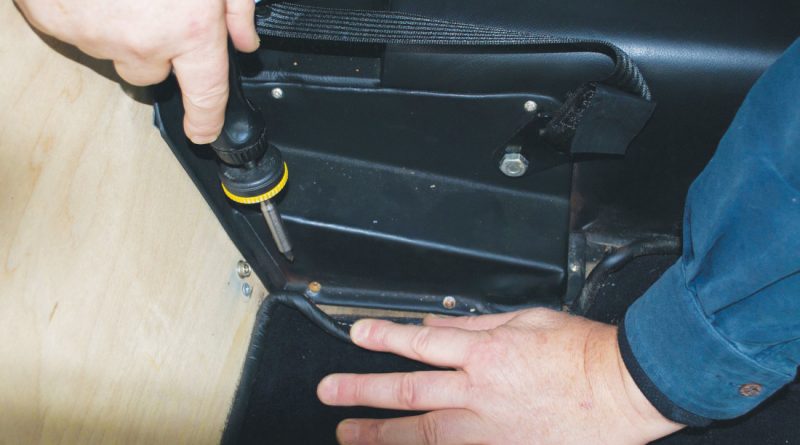 We need to raise the seat positioning lever up now we have lowered the nose of seat so you don’t trap our fingers on the Morgan’s cross member. This is just in front of the seat, but not so close to the nose of the seat that it will not lift the seat locking position latch allowing the seat to move on the runners. To do this:

Step 1a. Mark where to bend on both sides of the seat positioning lever

Step 1b. Remove the seat positioning lever using a prying tool (aka screwdriver)

Step 1c. Bend the seat positioning upward in a vice.

Step 1d. Install the seat positioning lever and check the angle against the seat base and also check you can release the latch allowing the seat to move on the runners.

Before we can install the seat we need to lower (slightly flatten) the Forward leaf-spring mount cover that is under the seat. To do this;

Step 2a. Remove all the screws holding the cover in place

Step 2b. Remove the seat belt mount bolt cover, a screwdriver is ideal

Step 3a. To remove the seat belt mounting bolt, you will need a spanner and a socket on an extension. (step 3b shows the location of the nut)

Now with the cover off, you need to measure the allowable heights for the cover (steps 4a & 4b) then mark this onto the cover using masking tape (step 4c). You now need to bend the cover at the new height. To do this, use the equipment you have to hand.

Step 5. With the bend in place, drill corresponding screw holes in the cover.

Step 6. Now the cover is lowered, you will need to ensure that the Seat belt mounting bolt can pass through the cover. Again place it in position, mark the new location, remove and extend the hole.

Step 7. You are now ready to install the new lowered cover in to place. For some of the screws you may need to drill pilot holes for the self-tapping screws as this will make it easier to secure them in place.

Note. When installing the seat belt mount, do not over tighten as it does need to move.

Place the seat in the cockpit on its forward position, check you finger gap to the cross member if it’s good carry on with the installation, if not revisit steps 1a to 1d!

Using the reverse process from the removal process (last month). Top Tip, change the seat bolts at the rear fixings for Cap-head screws as these use an Allen-key tool that makes it easier to remove and install seat.

Step 9. Fill the “new” hole that we made in the floor panel with silicone. This can be done by the person that’s under your Morgan!