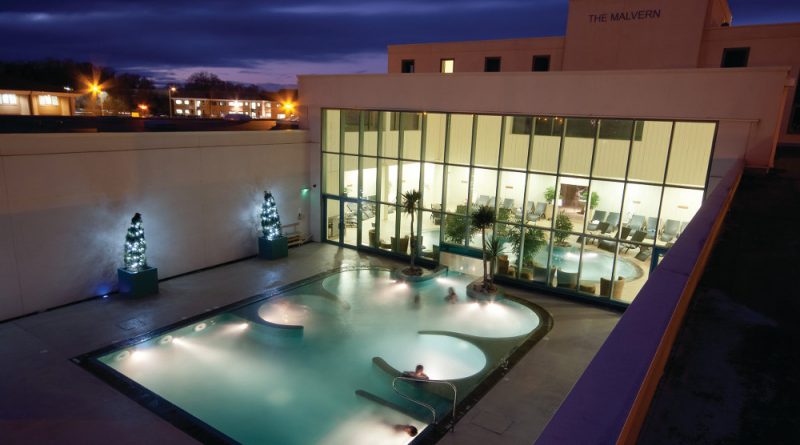 Sister hotel to the Colwall Park Hotel which we have featured in a previous edition, the Malvern Spa is quite different in that it is a modern hotel sited on the edge of town with a superb health and leisure spa as the central focus to its being. In fact it is the first spa to open in Malvern since 1910, and it was back in 1842 that the very first spa opened with Doctors James Manby Gulley and James Wilson offering what was referred to as the “Water Cure” and putting Malvern on the map as a spa town and a popular destination.

Malvern became famous for its many water springs and wells, where fissures in the granite and limestone retain rain water which slowly permeates through the rocks then escaping as springs. Beneficial properties of the water have been reported for over 400 years, and once the “Cure” was publicised Malvern rapidly grew from a hillside village to a large, wealthy town with its grand Victorian and Edwardian hotels and large houses. The water was bottled on a large scale in Colwall between 1850-2010, latterly under the Schweppes brand, and has been enjoyed by several British monarchs, including Elizabeth 1 as early as the 16th century, and Queen Victoria is said to have refused to travel without it.

It was in 1851 that Charles Darwin booked in his daughter for the Water Cure with Dr Gully, hoping the “Cure” would improve his daughter’s health….although how successful it was is debatable, as she is buried in Malvern ! Other famous patients included Thomas Carlyle (Scottish essayist, satirist, historian, mathematician, and translator), Florence Nightingale (the “Lady with the Lamp” and pioneer of modern nursing), Lord Tennyson (poet), and Samuel Wilberforce (English bishop, and remembered for his opposition to Charles Darwin’s theory of evolution). I wonder if the two ever met in Malvern and how fascinating it would have been to overhear their discussions…they certainly had a similar lifespan: Wilberforce 1805-1873, and Darwin1809-1882).

As an aside, HFS Morgan was born in 1881 and is reported to have been in poor health possibly caused by malnutrition whilst a pupil at Marlborough School and was withdrawn by his parents but rather than receiving the local “Water Cure” was sent to Italy to recover.

Malvern Spa opened in August 2008 and has four AA stars which were awarded in 2018 and a Trip Advisor rating of five stars and a Certificate of Excellence. The hotel has 32 bedrooms, with one suite and three multi-access rooms and a lift to the first and second floors.

Food is served throughout the day, and I met with Sara Biddle (Membership and PR Manager) who informed me that the restaurant and bar are about to be refurbished. Richard Dixon is the Head Chef of both the Malvern Spa and the Colwall Park Hotels (2 AA Rosettes), and celebrates locally sourced food whenever possible. The hotel is popular with actors performing at the nearby Malvern Theatre, and amongst others who prefer to remain anonymous (spot the familiar faces around the spa) recent famous guests include Ant & Dec; Sally Gunnell; Shane Richie; Will Young; and Clair Sweeney.

Car clubs are welcome, and Sara suggested that readers book direct to obtain the best rates. There is private parking to the front and side of the hotel, with CCTV coverage, and groups can by arrangement be seated together in the restaurant. I am told that the Spa is particularly popular with German Morgan owners, who I guess enjoy the spa and the many treatments on offer. Indeed, with no intention to be sexist here, but if for example it was my wife and I visiting Malvern, whilst I did the factory tour (just a mile to the factory and Pickersleigh Road), there would be nothing Chris would like better than an indulgent spa day to herself here at the Malvern Spa. (As it happens we live local and are both members and have been for many years)…. and gentlemen, there are treatments for men too so you too can relax and be spoilt whilst relaxing in serene luxury.

The spa has been awarded four Bubbles from the Good Spa Guide, and Elemis is the chosen partner for all treatments. The 20 metre indoor/outdoor heated hydro pool is the centre of the spa area with its bubble massage stations, water jets and hydrotherapy beds…all in a water that is constantly heated to between 35-36C ! Around the pool you will find Foot Spa’s, a Salt Grotto, a Crystal Steam Room, Herb Sauna, Kelo Sauna, an Ice Fountain, Bucket Drench Showers and a Tropical Storm Shower, plus lounge beds both inside and outside the pool. There are water drinking fountains and complimentary daily newspapers and magazines to read, and a poolside bar service.

There is a long list of treatments on offer with well trained therapists, so please visit the hotel web site for details and costs, and please note advance booking is highly recommended to avoid disappointment. Robes, towels and slippers are provided as complimentary during your stay.