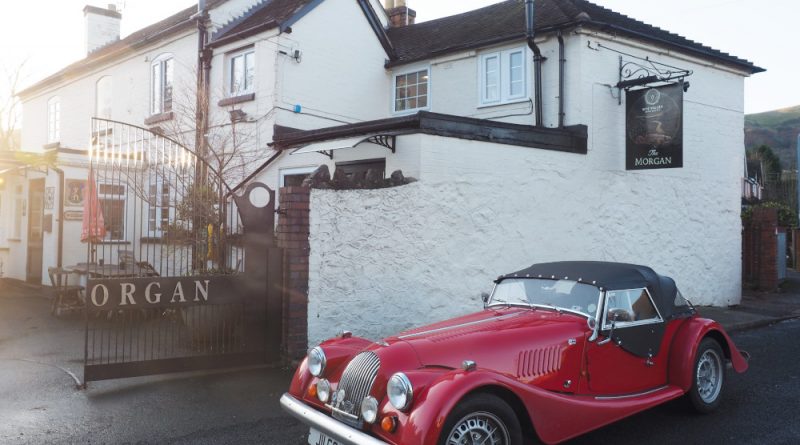 Readers will be aware that the Morgan Factory Visitor Centre is closed for the winter. So where is a Morgan enthusiast to go for a coffee during the dark months if there is none available at Pickersleigh Road? Well that’s the thing about Malvern, it’s a resort and destination in its own right. It’s not as if it’s some dark dismal and soulless West Midlands industrial town. With apologies to Coventry and Solihull….

Whilst it is acknowledged that there is no real substitute for Lizzie’s home-made cakes there are alternative Morgan themed venues within the town.

First and foremost is the Morgan pub on Clarence Road. Formerly the Cavalry Arms, the pub was renamed by owners, Wye Valley Brewery, in 2009. This was done in recognition of the Brewery’s home in Stoke Lacy. A section of the bar is given over to Morgan memorabilia and there is some fine Morgan artwork on display both inside and out. Of course a full range of Wye Valley beer is available, but crucially fine coffee is served as well as a full lunch menu.

It may surprise you to find that our next venue is part of the J D Wetherspoons empire, the Foley Arms. This Georgian Coaching Inn is over a hundred years older than the Morgan Motor Company and is probably the only pub to have a Mog in the bar! OK, it’s only a 3 Wheeler pedal car, but it does make a fine ornament sat on a high window ledge above the gaming machines and other Morgan bits and pieces.

Among the many famous people who have stayed at the inn are Charles Darwin and Princess May of Teck, the future Queen Mary. The Foley is truly a place of character, both the building and some of the clientele. Whilst ‘Spoons pubs are well known for their affordable beer; their coffee is very reasonably priced as well. It must also be said that in common with other establishments in the chain there is a good selection of alcohol-free ales and lagers available for drivers. In addition to the Morgan memorabilia, there are other fascinating historical displays on the walls. It also boasts of Morgan’s Bar, a private function room, sometimes used an overflow on very busy evenings as well.

Last but by no means least is the local branch of Cafe Nero, the well-known national chain of coffee houses. As with all establishments in the chain, the coffee and hot sandwiches have a distinctly Italian flavour, as does the decor of large mural photography. But in homage to Malvern’s premier motor manufacturer, there is also a wonderful picture of a very distinctive Morgan three wheeler in the pits at some long forgotten race meeting. The current management are very proud of their pic, but have no idea of its provenance. If any reader could enlighten them, tell us at MOG and we’ll pass the information on! Situated on Church Street with a view through its front windows of the Priory, you may be lucky enough to park right outside. Please leave your Mog in gear, the street is very steep!

Remember, Malvern has many other lovely coffee shops in addition to our favourites. If you know of a another one with Mog ephemera please let us know!