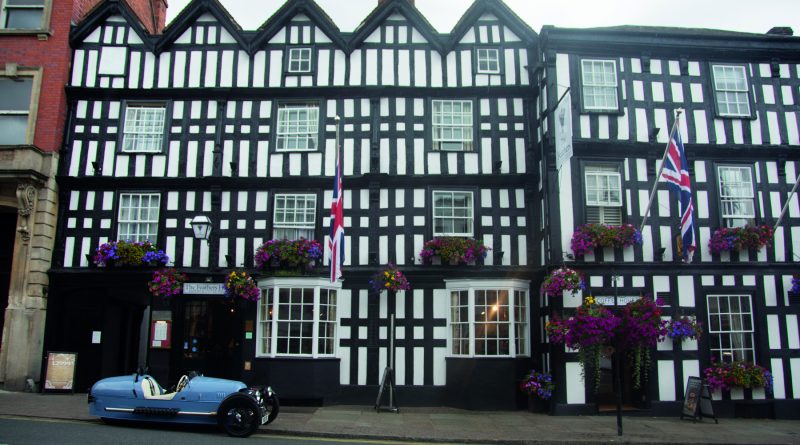 Words and photographs by Granville Orange and the Coaching Inn Group

Situated in the centre of the charming and historic market town of Ledbury, Herefordshire, The Feathers is a well known landmark and an excellent base for any Morgan owner wishing to visit the Malvern area. (see MOG Fleet this month for further coverage of Ledbury).

The hotel itself has such a history associated with it that it has warranted a book by Will Swales which is available for guests to take as a complimentary gift. I won’t go into too much detail here, but the distinctive black and white timber framed building dates back to Elizabethan times and was built between 1560-1570. The first records of the property functioning as a hotel date to 1702, when it was known as the “Plume of Feathers,” possibly as a declaration by the owners Thomas and Joane Pantall of their support for the young Prince of Wales and a hoped-for return of a Catholic king. At the time the country was ruled by Protestant monarchs William of Orange (a possible relation to myself ?) and his wife Mary.

Leaping forward through a fascinating and well-documented history, we come to 1908 when the assets of the hotel were divided between the two surviving children of the then owner, Sophia Edmunds. In the will, reference was made to the “carriages, horses, motor cars and effects”. Of interest to our readers is the reference in 1908 to the motor cars amongst the assets. The progression from horses and carriages to the provision of motor cars is not one that many hotelkeepers would have been able to afford at the time. With Stoke Lacy just a few miles away, one can only imagine if HFS himself might have arrived by car during those early days of motoring, bearing in mind the fact that the three wheeler Morgan dates back to 1909…and could it possibly be that the cars on hire from the hotel were Morgans ? I have asked the hotel historians the question.

By 1920 the hotel had undergone substantial change to cater for the mass production of the motor car, and the old coach houses and stables were converted into garages. A photograph taken at the time shows that the hotel continued to provide motor cars for hire, and signage to the front of the hotel indicates approval of the establishment by the Auto-mobile Association and the Royal Auto-mobile Club, which continues to this day, the hotel having three AA stars plus an AA rosette for its restaurant.

Today the hotel has private and free of charge parking for 20 cars and to the rear of the hotel there is also a large public car park with a direct access into the hotel. There are 20 bedrooms available, and from spring 2020 there will be an additional 5 rooms, all on the ground floor, including two rooms specially adapted for the disabled. These new five rooms are being created in what was the hotel swimming pool and spa area which is now closed. I met with Assistant Manager Charlie “Chuck” Macloed. He explained that of the 20 rooms, one is “Eve’s Cottage”..which is described as luxurious self contained accommodation, and there are five other de-luxe rooms. On the ground floor there is Fuggles Restaurant, an a la carte yet informal restaurant offering excellent cuisine, there is the bar which offers bar snacks all day long, including The Feathers popular “grazing and sharing” platters, and there is the new coffee shop which encompasses the residents lounge and in the evening becomes a comfortable place to relax and perhaps enjoy one or two of the 22 different gins on offer!

The hotel sources 90% of its meat produce from an award winning butcher in town, and other food produce is locally sourced whenever possible. The Feathers is part of The Coaching Inn Group which operates 15 historic coaching inns around the country, and in June 2019 The Feathers underwent a major refurbishment which has created an extremely comfortable, informal and relaxing experience for guests and non-residents alike whilst retaining the charm and character that has welcomed travellers to Ledbury for the past 317 years.

I asked Chuck about the hotel’s folklore and ghosts. He told me the story of Emily, a “friendly little ghost” who lives in what is now a linen cupboard on the top floor of the hotel. Perhaps less friendly, Chuck has had pillows thrown at him and he told me of one particular episode when he was working late at night and alone in the hotel and kept finding two dining chairs on the floor. On three occasions he went to pick them up and place them around the long bench style table, only to find them laid on the floor again. He went to pick them up a fourth time and before his very eyes they were upturned and on the floor again ! I have in the past had the pleasure of staying at The Feathers and the wobbly, creaks and squeaks of the main staircase and corridors add to the atmosphere, spooky or not.

The hotel welcomes Morgan owners on a regular basis, is only 11 miles from the factory in Pickersleigh Road, and is on the HFS 110th Anniversary Route (see last month’s edition of MOG). Car clubs are also welcome, and the hotel advises readers to book direct with the hotel and you will be guaranteed to be offered a room rate £5 cheaper than the cheapest internet booking sites quote. Multi room discounts are available by negotiation with the hotel. Check-in is the usual time of 3.00pm, but there is a bag drop facility and guests have the hotel facilities and the whole of Ledbury to enjoy if you do arrive early, and whilst check-out is the usual 11.00am, you can leave your cars in the hotel car park until 5.00pm on the day of departure. Ledbury is served by good rail links and is on the Hereford – Worcester – Paddington line should guests prefer not to drive, and talking of guests who drive, one regular visitor to the hotel is a local resident of Top Gear fame. Other famous local residents include Liz Hurley, albeit I did not have the pleasure of bumping into her on this occasion…perhaps next time !