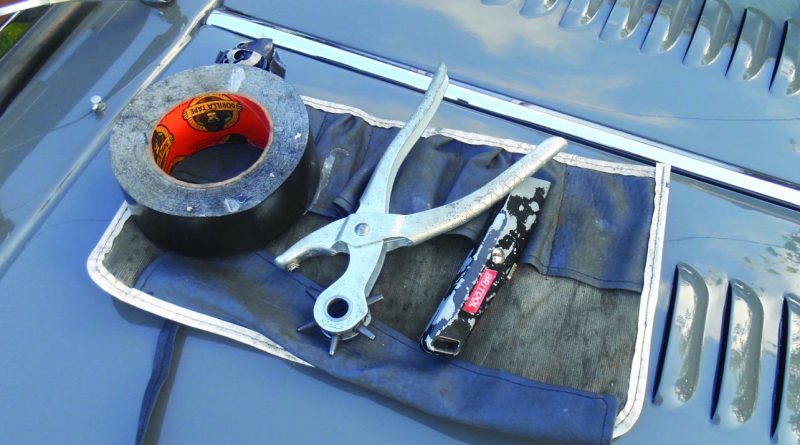 Rumblings this month have been inspired by the afternoon’s weather at Thrill on the hill.

This article is for all Morgan’s with studded screens and not the easy-up type, as they never leak. There are two methods to stay dry; the first is to get a passenger with long arms, a good cloth and a bucket to wring out the cloth. The second, is to install a hidden gutter between the hood and the windscreen that stops the water getting in by channelling the water sideways towards the doors. Here we will concentrate on the second.

To do this you need; a roll of duct tape (use the good brands as the adhesive is better and apparently Monkey tape works in water!), leather hole punch-pliers, a Stanley knife (or scissors) and a dry day (if outside).

Step 1. Remove the hood from the windscreen studs and clean both surfaces to remove road dirt and dust.

Step 2a. Apply a strip of duct tape to the vertical sections (45 sections) of the window on both sides. The tape needs to be placed so that the lower half of the tape is stuck to the windscreen frame, the upper half will be attached to the hood later.

Step 2b. Using the hole punch, make holes in the duct tape to allow the stud to pass though. (Picture 2.) Making sure that you push the duct tape onto the frame ensures that it adheres to the surface fully.

Step 3. Apply a strip of duct tape across the windscreen, again using the hole punch to make holes in duct tape to allow the studs to pass through. firmly sticking the duct tape to the surface.

Step 4. We now need to fold the “unstuck” duct tape over the studs to mark the duct tape as we need to either punch or cut (using the Stanley knife or scissors) a corresponding hole/wedge/slit on the unstuck duct tape, so when the hood is popped into place the studs work correctly and the duct tape sticks to the hood (Picture 3.)

Step 5. Install the hood onto the studs, checking that the upper section of the duct tape is fully stuck to the underside of the hood.

Step 6. Stand back and marvel at the multiple uses for duct tape.

This is not a suitable fix if you drive with the hood down most of the time. As you need to apply new duct tape after the hood has been removed. But when you have to drive a long distance with no choice it’s better than getting really really wet.