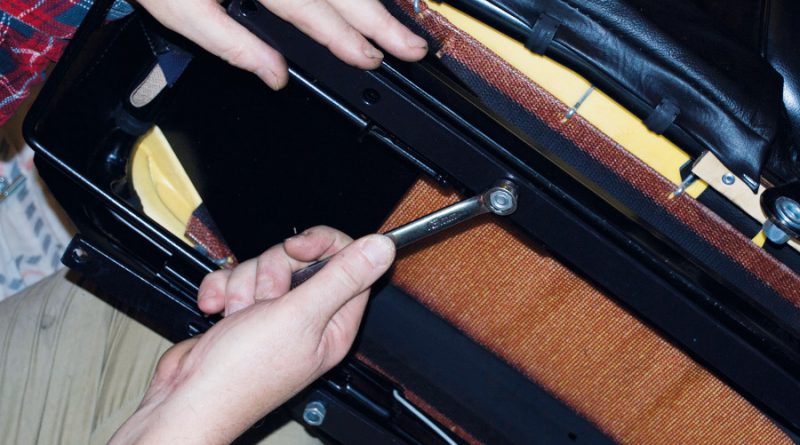 To do this you need; Tools as stated throughout the write up. You will also require an assistant who is either very thin! Or a car lifted onto jack stands; as you require access to the seat mounting nuts that can be seen (step 2b and 3b) on the underside of your Mog.

Step 2a. Remove the rear seat mounting bolts. You will need to stop the bolts from rotating in the runners; this can be done using a Flat screwdriver to ‘wedge’ the bolt head as an appropriate tool such as a socket will not fit!

Step 2b. The rear nuts are located underneath your Mog, on the rear chassis cross-member you will require a socket or spanner for this dependant on access and a friend.

Step 3a. Remove the front four seat mounting bolts, using a spanner or socket to stop the front bolts from rotating on removal.

Step 3b. The front two nuts are on the metal cross plate and the rear front two are on the wooden floor board, again you will require a socket or spanner for this dependant on access.

Step 5a. You know have to drill out the “blind” holes. Start by drilling a pilot hole through the wooden wedge into the floorboard (typ. 13mm)

Step 5b. Remove the wooden seat spacer and drill the pilot hole out to 16mm ready to receive the nut on the bottom of the runner bar.

Step 6a. Loosen the retaining nut and bolt on the runner mount (as seen on the wooden spacer) and twist out of the way (roughly position at 90 degrees)

Step 6b. Remove the rear nut and bolt on the seat runner.

Step 6c. Install a longer bolt and insert 3 washers between the seat frame and the runner.

Step 6d. Remove the front nut and bolt on the seat runner.

Step 6e. Install a longer Bolt and insert 7 washers between the seat frame and the runner.

Step 7. Align the base mount with the runner and tighten the centre retaining nut and bolt

Next month the installation process.