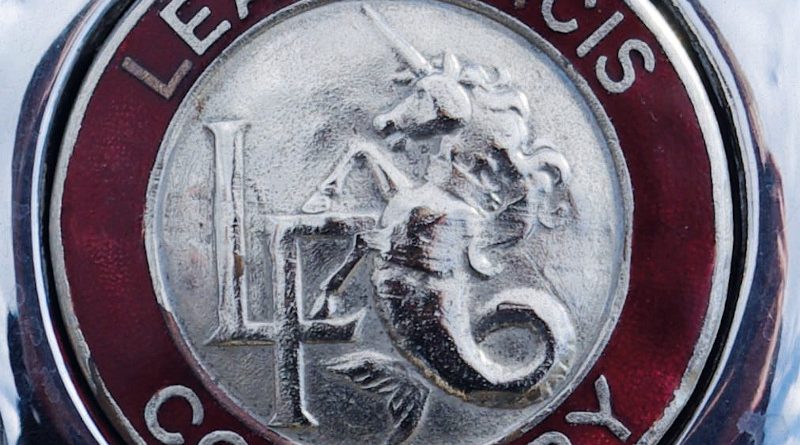 Say ‘Lea-Francis’ to most people, and they’re more likely to think of Worcester Sauce than motor manufacturing. For the cognoscenti, though, they made some fine British motor cars.

Draw a map of the UK’s motor manufacturing history, and you’ll find that an awful lot of automotive ley lines converge on Coventry. It certainly was the Detroit of Great Britain. One of the minor but significant pins in that map would be marked Lea-Francis, and, as with so many other motoring names, they began by making bicycles.

Richard Henry Lea and Graham Inglesby Francis got together and began their business – then called Lea and Francis – in a small factory on Days Lane, in Coventry. The bicycles they turned out were top quality but very expensive; however, they seemed to find their market niche and, within a year, had moved to larger premises on Lower Ford Street.

Compared with many of their contemporaries, Lea and Francis were quite late to the game when it came to jumping on the motor car bandwagon – they didn’t begin until 1903. The first car to bear the name was the 15, a peculiar machine with a 3.5-litre, three-cylinder engine under the floor, designed by Alex Craig of the nearby Maudsley Motor Company. This was far from successful, with only three examples being built, so Lea and Francis began building cars under licence from another neighbour, Singer.

This status quo was maintained until 1911, when part of the company branched out into motorcycles. Again, they began to build a reputation for quality (and accompanying expense), and this arm of the company continued to build bikes through the Great War until finally closing the operation in 1924. Incidentally, Graham’s son, Gordon, went on to be the Francis in Francis-Barnett.

In 1919, Lea and Francis decided to have another bash at the motor car market, assembling cars from bought-in components and hyphenating the name on the badge to Lea-Francis. These began with the short-lived 2.3-litre 13.9, and the more successful two-litre 11.9 model, designed for them by an ex-Singer designer. The models were then assigned letters, beginning with the 1922 C-type, the 1923 D-type and so on, but it was an uphill struggle until they joined forces with Vulcan of Southport, another small motor manufacturing concern, and began sharing resources. Lea-Francis supplied Vulcan with transmissions and running gear, and Vulcan returned the favour with bodies, and so on. They also shared dealerships, and the Vulcan 12 was also sold as the 1926 Lea-Francis Kirkstone, for instance.

This joint effort continued through the Twenties, but as Lea-Francis’s star was in ascension, Vulcan’s was in decline. Increasingly, Vulcan shifted production to trucks and buses, abandoning the passenger cars, and the last cars to bear the Vulcan name in 1930 were, ironically, rebadged Lea-Francis’.

From the mid-Twenties, Lea-Francis were beginning to get themselves a reputation for sporting prowess. While the cars’ quality had rarely been questioned, they began to upgrade their chassis and running gear to match the demands of the competitive driver. This led to some real track stars, the first purpose-built racer being the supercharged 1926 Lea-Francis Special, nicknamed The Lobster, which debuted at Brooklands’ August Bank Holiday meeting that year. This in turn led to some rather sporting production models, such as the Hyper Type-S and the impeccably named Ace Of Spades six-cylinder. The Ace Of Spades was so-named purely due to the shape of the timing cover on the Lea-Francis-designed and built six-cylinder engine. The Hyper used a Cozette-supercharged 1.5-litre Meadows engine, and was supposedly the first British supercharged production car. In 1928, Kaye Don drove a Hyper to victory in the Ulster TT on the Ards road circuit in front of a quarter of a million spectators.

This really put Lea-Francis on the map but, as the old Vulcan-era 10 and 12 models were being phased out, and that Ace Of Spades engine proved to be pitifully unreliable, sales of a few dozen sporting models per year would not be enough to keep a manufacturing concern afloat through years of recession. In 1931, the receivers were called in.

The company sat in limbo for a few years until, in 1937, some gentlemen who had departed another famous Coventry concern, Riley, stepped in. These included new chairman, George Leek, and designer, Hugh Rose, and they moved the factory from Lower Ford Street to Much Park Street, about a mile away, renaming the company Lea-Francis Engineering. Their first models were handsome new 12 and 14hp models, both powered by a new engine that incorporated dual camshafts mounted high in the block, remarkably similar to contemporary Rileys…

Sadly, only a few dozen of these models were produced before war was declared and the production lines were put to other uses, and we all know just how much attention Coventry received from the Luftwaffe.

Having survived the war, Lea-Francis returned in 1946 with the 14, a development of the pre-war model, with a 1.8-litre engine and aluminium-skinned body in luxurious saloon or handsome Sports guises. They weren’t cheap, but they found buyers, and would be one of the more popular models Lea-Francis ever made. Some of the 14 chassis, complete with running gear, were sold to Connaught, who tuned up the motors and turned them into Connaught L2 and L3 racing cars, while some of the engines found their way into Formula 2 cars. Still more chassis were sent to outside coachbuilders to be turned into beautiful wood-bodied shooting brakes.

The range was updated in 1948 when the streamlined 14/70 came along, and used independent front suspension and hydro-mechanical brakes to great effect. This was joined in 1949 by the 18 saloon and 2 1/2 Litre sports tourer, both based on the IFS chassis but using a new, Rose-designed 2.5-litre four-cylinder offering up to 120bhp.

This engine was a great success, being used in specials, sports and racing cars all across the world but, sadly, the company itself wasn’t buoyed by the prowess of its own products. It began to seriously struggle for sales in a packed early-Fifties marketplace, and having been conspicuous by their absence at the 1953 Earl’s Court Motor Show, they quietly wound up car production in 1954.

The company continued with all its other general engineering work, and nothing more was said about cars throughout the Fifties. Then, seemingly out of nowhere, in the spring of 1960, Lea-Francis decided to get back in the game and build a sports car to debut at Earls Court in October. They dragged a tubular steel version of a 1948 IFS Sports 14 chassis out of a dusty corner, upgrade it with Dunlop disc brakes and rack and pinion steering, and chucked in the 2.6-litre straight-six from a Ford Zephyr. This was all clothed in a bulbous yet strangely appealing two-door drophead body, painted an unusual lilac colour with gold trim where you’d expect to find chrome, and was finished in time for the Motor Show. Named the Lea-Francis Lynx, it aroused plenty of interest, but the proposed price, coupled with the fact that there was no ‘stock’ and Lea-Francis would only build them to order, meant that most potential buyers looked elsewhere. Only the three prototype Lynxes were ever built, and all survive.

The Lynx was undoubtedly a flop, and was just about the last nail in the coffin for Lea-Francis cars. The company had a few plans involving building bubble cars and a new large luxury saloon powered by Chrysler’s huge V8, but neither amounted to anything. The closest Lea-Francis came to car production was the 1961 Uni-Horse, a tiny garden-size tractor powered by a 420cc BSA engine. This actually looked quite promising, and the rights were sold to Williams Ltd in Droitwich, who continued production for a number of years.

Meanwhile, back at Much Park Street, they had finally decided that enough was enough, and the automotive side of the company called in the receivers in 1962, leaving the engineering side to carry on as normal. After 50 years – on and off – and some 10,000 cars bearing the Lea-Francis badge on the grille, the towel was thrown in.

An enthusiastic entrepreneur named Barrie Price bought the rights to the name and many of the company’s assets from the receivers, and has provided spares, repairs and restoration for fans of the marque ever since. He even built a brand new post-war 14hp Sports from stocked parts in 1976. Shortly afterwards, he designed a home-brewed Lea-Francis 3.5-Litre special on a steel ladder frame with aluminium coupe or drophead bodywork and Jaguar engine and running gear. It debuted at the 1980 Motor Show, followed a whopping 12 years later by an extended-wheelbase version that revived the Ace Of Spades name. Reports vary, but it seems that between five and 10 of these were built, total.

It all went quiet again after that until 1998, when Motor Show-goers were treated to the Lea-Francis 30/230. This ultra-modern, high-tech, aluminium-bodied two-seater was designed by Professor Jim Randle, best known for his work on Jaguar’s XJ220, and was powered by a 3.0-litre Vauxhall V6. It was a beauty, but the prototype was the only 30/230 that was ever built.

That was the last car to carry the Lea-Francis badge. After almost 60 years at the helm of Lea-Francis Cars, Barrie Price sold the whole concern last summer to Dave Wood of Orson Equipment, a long-established company making splined hubs and spinners for wire wheels, among other parts, for classic vehicles. Dave is still moving, cataloguing and identifying the parts in the inventory, but keep an eye on www.leafranciscars.co.uk for further developments. He has also stated that, “Barrie Price will remain as non-executive Life President of Lea-Francis Cars.” Are there likely to be any more appearances of the strange Unicorn/Seahorse hybrid on the Lea-Francis badge? You never know…