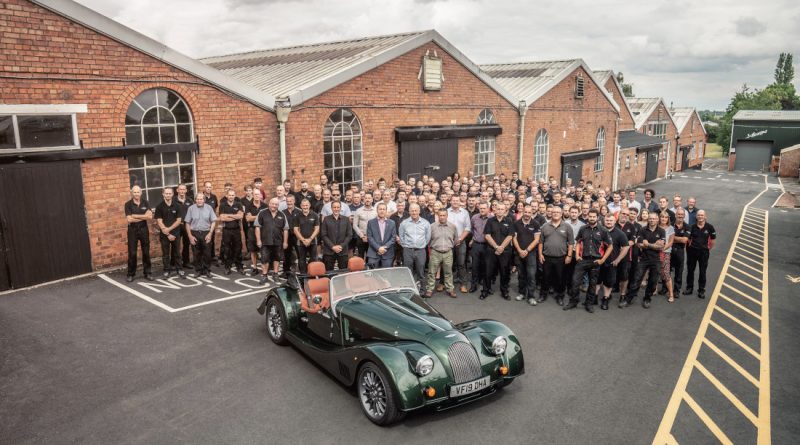 The Morgan Motor Company is to ramp up its recruitment programme, despite economic uncertainty and a challenging automotive industry landscape.

The Company now employs a record 233 staff. Thanks to the recruitment drive, over 40 new roles have been created so far this year, and there are currently 10 open job vacancies across various departments and levels of the business, including a number of new senior roles. After starting 2019 with 204 employees, the company projects a workforce of 240 by the end of the year.

This news comes six months after Morgan announced significant investment from Invest-industrial, which is now the majority shareholder in the company. The increase in recruitment coincides with improvements to infrastructure at Morgan’s factory in Malvern Link, which has been home to the sports car manufacturer for the last 105 years. A seven-figure sum has been set aside for continued improvements to the historic factory site, while a new Technology Centre and Visitor Centre are currently in discussion.

The investment in new staff and resources comes following the launch of the Plus Six, which has sold in record numbers and marks the beginning of a new era of sports cars from the firm. Morgan’s Engineering and Design department has recruited almost 20 new job roles over the last six months alone. The increased engineering capability ensures that Morgan can stay ahead of the latest legislative requirements and explore cutting-edge technology to match its unrivalled craftsmanship. Morgan has embarked on a journey to modestly increase production over the next five years and will expand marketing and distribution operations in order to meet this plan.

Steve Morris, CEO of Morgan Motor Company, said: “We are delighted to be recruiting an unprecedented number of new roles into the Morgan business.”… ..“The news that our engineering and design departments are continuing to grow is significant, and we look forward to sharing some of their work during the next 12 months.”

Many readers will remember our news story from May 2018 concerning the Asparagus’s Run from the Fleece in Bretforton to the Gloucestershire and Warwickshire Railway in Broadway, and thence on to Cheltenham racecourse. Little did we know that the seeds of probably the biggest social event of this year, indeed of any year, were sown on that day. Editor Nigel Bradford was asked to drive one of the Morris dancers from the pub to the station in his Plus 8. When the gentleman got in, our editor greeted him with a handshake and said “Nigel”. For a brief moment he was confused to hear the answer, “Yes, and who are you?”. Two Nigels in one Morgan? What were the chances of that? As It happens, surprisingly small. The other Nigel turned out to be Nigel Smith the Landlord of the Fleece. He had recently discovered that no new Nigels had been registered in the UK during the past year, despite the supposed popularity of one particular political individual. (That does rather make you think, doesn’t it?) Both Nigels agreed on that short drive that something should be done about it, and so the plans for Nigel Night on the 28th of September 2019 were made.

The great day dawned and it must be said the that the weather could not have been worse. Torrential rain fell all day and many south Worcestershire roads were flooded. Last minute instructions were sent out stating that most of the event was being held in the grounds of the pub, so dress accordingly. Of course no mention of cancellation was made. This was Our Night!

On arrival all Nigels were registered, and badges handed out. These badges proclaimed the wearer to be “Nigel” or “Not-Nigel” . The Nigel badges ran out. But this was of no consequence as us Nigels just knew who to greet with a cheery “Nige!” and who to just pity for having a boring and common name. This was liberation, as lifetimes of torment and mockery just didn’t matter anymore. The night consisted of music from Nigels, stand-up comedians called Nigel, drinking vast quantities of Ale called Nigel, but no political Nigels. (Phew!) Over 400 Nigels were there, the greatest number ever assembled in one place. Nigels had travelled from all over the world. Any thought that there is nothing in a name that shapes a man’s character were dispelled. Indeed, one Not-Nigel was heard to say to another Not-Nigel, “you couldn’t have a Dave Night could you? It wouldn’t be half as good”.

The Kent Morgan Dealership has proudly announced that it is the new shirt sponsor of Borough Green under 12s football team. The boys are seen here during a photo shoot at the Dealership on Saturday 26th October. This initiative is certainly one way of getting the Morgan name out there amongst a younger audience. The shirts look great with the BHM Logo on the chest, sadly there are no plans at present to market adult size replicas. Experience has shown that sponsorship of a particular team a car company often creates a bias towards that company in the club car park. So perhaps Sundays might begin to see a whole new type of breakfast meetings at 10:30 in the surrounding area following what is expected to be a winning team.